Long before diamonds became highly sought after and more accessible during the 19th century, pearls were one of the most treasured organic gems in the world. Before cultured pearls were invented by Kokichi Mikimoto (1858-1954) in 1893, naturally grown pearls were extremely rare and costly (more expensive than diamonds). Historically, various cultures have used pearls to create jewelry for thousands of years. During ancient times and in the age of antiquity, pearls often represented a symbolic or sentimental act of adornment. Pearl artifacts can be found in ancient civilizations worldwide, such as Egypt, Rome, the Middle East, and China. It is common to see antique paintings depicting people wearing ornately designed pearl dangle earrings and necklaces. Several art periods (Baroque, Neoclassicism, Romanticism, etc.) included portraits of individuals wearing pearl accessories. Noble dignitaries, diplomats, and aristocrats decorated themselves in pearl accessories. While examining these antique paintings, the pearl details are intricate, detailed, and imitated in real life. Pearls were often used to create necklaces, dangle-drop earrings, brooches/pins, and rings. Pearls were also sewn onto dresses for decoration and were a favorite jewelry preference for portrait-sitting. Queen Alexandra of Denmark (1844-1925) wore pearl choker necklaces to cover a childhood scar, becoming an iconic style inspiration for ladies. 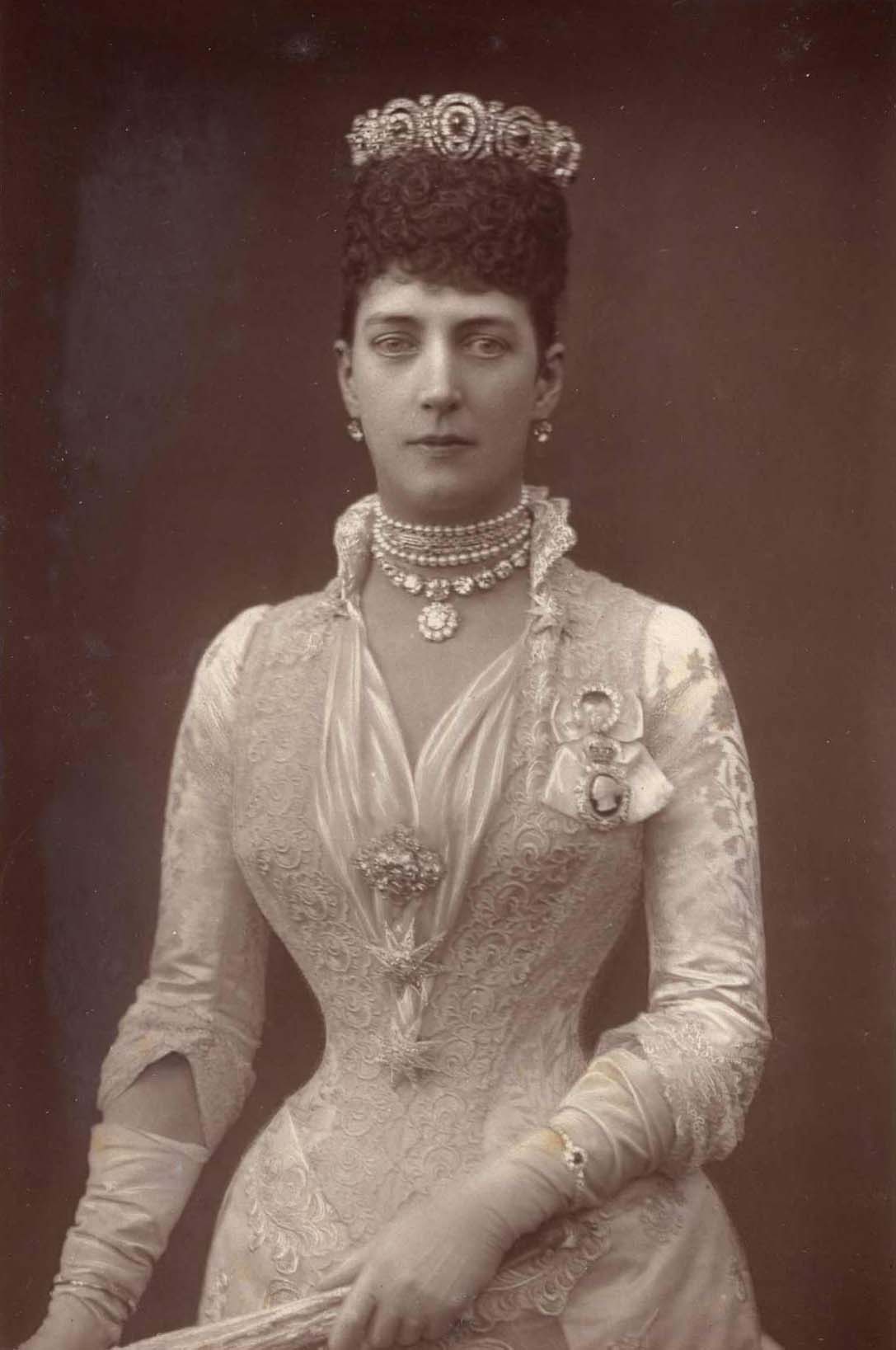 Queen Alexandra of Denmark wore multiple strands of pearl chokers around her neck, which hid a childhood scar. She started a popular trend among ladies, which became known as a collier de Chien (dog collar)

There are different types of pearls and locations of origin. Pearls are formed when an irritant enters an oyster, and it reacts by secreting a substance called nacre. The nacre surrounds the hassle and is the protective iridescent pearl layer of the molluscan shell.  Pearls come in various colors: pink, cream, white-gold, black, and orange. One of the most highly sought-after and prized pearl shapes is round. Round pearls are commonly used for strings of pearls, such as necklaces and bracelets. Seed pearls are tiny round pearls used in brooch styles, lockets, and earrings. Freshwater pearls are found in freshwater mussels located in rivers and ponds. And are commonly produced in Japan and the United States. Saltwater mollusks produce saltwater pearls and include cultured Akoya pearls, South Sea pearls, and Tahitian pearls. Freshwater pearls have thicker nacre than saltwater pearls. However, saltwater pearls take more time to develop because the oyster only produces one oyster at a time. Blister pearls are irregularly shaped and formed on the shell of the oyster. Blister pearl jewelry is every day in antique brooches and rings.

Cultured pearls are natural pearls that include human intervention to help formation. An irritant is placed inside the oyster, and the pearl forms due to a natural reaction. However, this formation process can take years to complete. A Mother of Pearl bead is used as an irritant to speed up the formation.  During the late 19th century, Kokichi Mikimoto created the first semi-spherical cultured pearl, which helped to make pearl jewelry more accessible and less expensive to purchase. Mikimoto went on to advance the science of pearl cultivation, and the Mikimoto brand is still a leading cultured pearl brand that is highly sought after and legendary. Imitation pearls can be created from various synthetic materials, including plastic and glass. Pearl jewelry has been mass-produced and designed into many different styles. The striking portraits that display pearl jewelry are fascinating and superbly designed. The evolution and history of the pearl continue to inspire. Pearl jewelry is still considered a classic preference. Innovative and legendary style icons such as Coco Chanel (1883-1971) and Jackie Kennedy Onassis (1929-1994) were pearl enthusiasts and helped to encourage the versatile style uses of pearls. In modern times, pearls are still valued and worn in various ways. Thousands of years later, pearls are still rare beauties, unlike any other gem.