Coral jewelry has been used in ancient societies for various reasons. Historically, coral was often used for sentimental adornments, serving as 'good luck' protection from illnesses and common pandemics. Coral accessories thousands of years old can be found in many different ancient societies, including Egypt, Rome, Greece, and China. Native American tribes were first introduced to red coral in America by the Spaniards during the 16th century. One of the most highly sought-after and collected corals is found in the Mediterranean waters and is often called 'blood coral' due to its deep red tone. Although we often refer to coral as an 'organic gemstone,' it is the carbonate secretions of polyps, which are tiny marine invertebrates. The color of coral can range from deep red, peach, pink, and even black hues. Many coral reefs have been damaged and endangered in modern times due to pollution and climate change impacts. Antique and vintage coral are great options for wearing sustainable jewelry while emphasizing historic preservation.

In today's antique and vintage market, popular precious coral jewelry collectibles are often from the 18th and 19th centuries. During the Georgian Era (c.1760-c.1837), coral was collected from the Mediterranean regions of France, Italy, and Algeria. The jewelry in this period included finely designed vibrant red coral pieces such as necklaces, one of the most common styles of the time. Coral necklaces were often given to children for sentimental purposes, such as protection from illnesses. There are many 18th and 19th century painted portraits of women and children wearing coral beaded necklaces and earrings. During the Georgian Era, some of the most intense 'blood coral' hues were used in jewelry, many of which are very rare to come by presently. 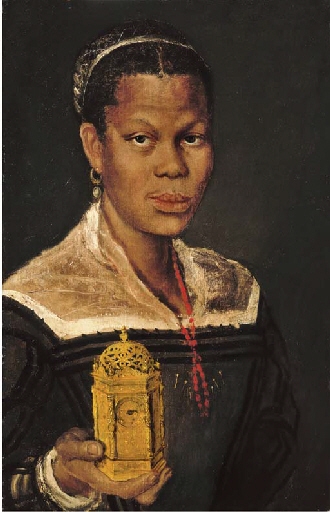 (Portrait of a Lady wearing a Coral Necklace and Holding An Ormulu Table Clock, by Annibale Carracci)

During the Victorian Era (c.1837-c.1901), coral was often intricately carved into cameos and commonly used during the Romantic Period (c.1837-c.1860) of Queen Victoria's reign. In the 19th century, coral became increasingly more of a fashion trend, not just for sentimental purposes. The coral jewelry made during the 18th and 19th centuries was finely designed. Italy was one of the leaders in producing magnificent artisan-crafted coral pieces with intricately carved designs. Italy's techniques and styles of engraved coral jewelry greatly influenced the U.S in creating exquisitely designed pieces as well.
In Native American jewelry, coral began to be commonly used after the Spaniards introduced red coral to native tribes during the 16th century. The trading of coral became popular among the two cultures. Coral in Native American jewelry symbolizes different concepts, which include the earth, the ocean, strength, wealth, and war.